A few weeks ago I had the pleasure of sharing with you my very first versions of the Violette shirt by Dessine moi un patron.To review of silk and cotton versions
As noted earlier, I love gown Violette shirt by Dessine moi un patron to cut, and especially the detail back;))) By sorting my many meters of fabric, I fell on this organza bought last summer at Mondial Tissus, hence the fact that I found most on the site. And the desire was born to make a yoke as my Bottega shirt. The Fall season pointed me towards a long-sleeved gown … What prompted me to make a new version of Violette shirt;)))

So I opted for an off-white gabardine in Bennytex ideal in terms of thickness and to enhance organza and folds … The « magic » gold piping has become;))))

As a preamble, I hesitated to duplicate yoke « organza » on the front and back, after reflexion I decided to concentrate it on the back !!!
After mounting the folds, I first asked and pinned the piping and then put on top Organza yoke so to have the piping in « sandwich ».

Given the transparency of organza, I kept that part of the parmenture cut in the gabardine, namely the neck front. I slid at the shoulder seam for beautiful finishes.
So I made a tidal hem on the collar of the back yoke, this allows leaving any transparency;)))

It will do more to put your buttons so I chose an iridescent copper color so highlight the organza;)) The diameter that two buttons are enough compared to 3 initially on the pattern.

In conclusion, I ramble but I love this blouse for her cup and a pleasure to play with bi fabrics on back yoke;)))

This error message is only visible to WordPress admins

Error: API requests are being delayed. New posts will not be retrieved.

Error: API requests are being delayed for this account. New posts will not be retrieved. 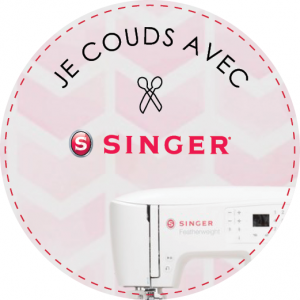